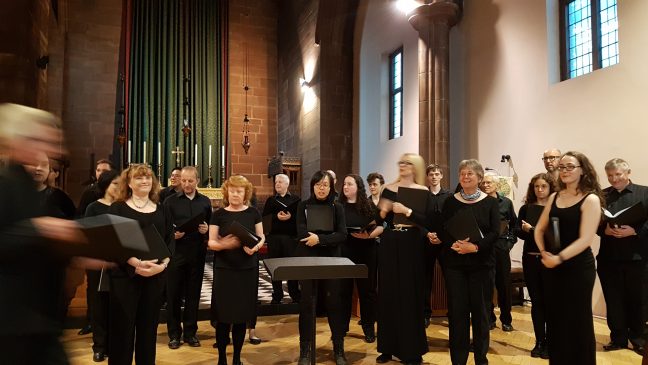 Strathclyde University Chamber Choir drew its concert season to a close last Friday with a capacity audience at the West End Festival in Glasgow.  The concert embraced the theme of ‘the dance’ – with an evocative counterpoint of traditional and modern madrigals, and a glorious Bach motet.

Premiere of ‘Dancing Star’ the highlight of the evening’s programme

The highlight of the programme for choir and audience alike proved to be the Scottish premiere of the new work by award-winning young composer, Toby Young, commissioned by the choir, in association with two other choirs, the Joyful Company of Singers and Exultate Singers.

Preceding this, the choir sang some 16th Century ‘balletti’  (madrigal-style dances) from England, Italy and Germany, followed by a more modern interpretation of music of the same period, with Benjamin Britten’s ‘Choral Dances’ from his lost opera Gloriana, composed for the coronation of Elizabeth II.

Reflecting the range of music that the choir performs, the concert finished with the exiting and energetic motet by JS Bach, ‘Singet dem Herrn’.

Listen to an extract from our concert – one of the Italian balletti from renaissance composer,  Giovanni Gastoldi

Strathclyde University Chamber Choir has become a regular feature in Glasgow’s annual arts festival, the West-End Festival – and it was lovely to see a mix of familiar and new faces in the packed audience again this year.   We are actively recruiting for the new season, and so, if you are interested in singing with us, don’t forget our ‘tester’ rehearsal and social evening, tomorrow 6th June (see our recent posting) – or just get in touch.

Rehearsals for the new season start again in September.  Don’t forget to look out for our new season’s programme of events.

The choir has performed for audiences all over the country. Click here to view a list of our previous performances.

Join or Collaborate With Us

We're always on the lookout for individuals or choirs who share our passion for singing and would like to work with us.

Keep an eye out for our upcoming performances via our Eventbrite page.

Strathclyde University Chamber Choir is managed by The Strathchamber Trust, a charity registered in Scotland. Charity No. SC043275